How to Boost Your Numbers Playing Games with Twitch Integration: 5 Examples of the Best Games You Can Play That Get Your Viewers Involved 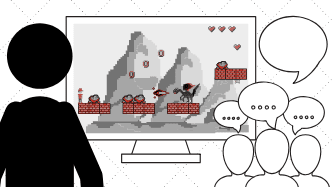 The biggest challenge for any streamer, regardless of channel size or platform they stream on, is increasing their concurrent viewer number. Ideally, you want as many people as possible to hang out in your stream for as long as possible. Simple and logical.

There’s tons of advice online to help you out with that. However, with all the tips and tricks meant to increase your viewership and engagement on Twitch, it’s easy to get overwhelmed. Every blog and YouTube tutorial is telling you to do hundreds of different things that may be worked for them at one time – often with no more proof than their subjective opinion. It’s hard to know which directions to follow to get a measurable effect.

But what if you don’t have to force yourself to do anything other than getting a game that is incredibly fun to watch because it’s interactive? No, wait, bear with us. It may sound too simple to be true but it works. There are games out there that naturally improve your watch time because your viewers can have a real impact on what is happening in-game in real-time as you are streaming.

What you are looking for are games with Twitch/Mixer integration.

It’s a match made in heaven. You get a great game that you can stream, and your community gets a chance to help you out (or utterly destroy you for fun) in-game. It’s such a great way to engage people that some games doubled their all-time minutes watched in a month after including integration for the first time.

That’s all great, but what are actual games that have this feature?

…or as the developers call it ‘rogue-lite, Castlevania-inspired action-platformer’ was officially released in 2018, and it’s still going strong. With new content added on a regular basis – The Legacy Update that landed in December 2019, and The Bad Seed DLC with a release date in January 2020, the game will make a big comeback any time now. </>

So what does the integration do for Dead Cells?

When you enable it, you will get an in-game bird – Captain Chicken, that any of your viewers can take over. It will follow you around and help you out by healing you…or not so much. It all depends on the person controlling it.

People in your chat can vote on what happens in-game. Which stats will get upgrades? Will you get extra monsters during the next level? Will captain Chicken help you out with taking out enemies? Or will it turn out to be a big exciting mess where you frantically try to survive?

Book of Demons is a deck-building hack and slash and a first in a series of awesomely looking games based on video game classics. The game receives regular updates and new features, most notably Hellcard that will launch in Q4 2020. Developers also announced the second installment in the series, Book of Aliens , so it looks like the franchise is here to stay.

What options does integration give to your viewers?

Boy, what option doesn’t it give? Developers really went for it with this one, and they included a massive range of positive and negative interactions available for your chat.

Your viewers can heal you, attack and freeze random monsters, generate drops and prizes, even give you temporary god mode…or they can stun you, light you on fire, mess with your cards, spawn monsters or steal items on the screen.

They can also vote on legendary cards that your character gets in-game.

Oldie but goodie, Party Hard is a party-murder-repeat-franchise (developers call it a stealth strategy, but there’s so much more to it than that) that is unbelievably fun to play and stream. Especially with its great soundtrack, a massive system of random encounters and Twitch integration that literally includes summoning a Sharknado, taking over NPCs, or calling in special forces to stop you from getting rid of all the noisy partygoers.

Party Hard 2 goes even further and enables your community to create custom levels for you to beat. Viewers can either help you out or try to stop your party massacre. Or…well..dance and mind their own business as everything explodes around them.

How’s that for an excellent streaming integration?

This game, in essence, is a brutal pixel-art strategy simulation where you train and strengthen your gladiator team to achieve victory in a Roman arena. It sounds quite simple, but the gameplay is surprisingly engaging. You start rooting for your fighters from the start and you’d do a lot for them to win.

The integration is not as extensive as with the previous games, but it adds a lot of depth to the game. Gladiators in the arena can be named after people in chat, giving every game a unique setting. Also, as the fight’s progress, your community can encourage and cheer on you or boo your team – viewers can even decide the fate of some gladiators, giving a thumbs up or down for unlucky warriors.

Last but not least, Rimworld: a sci-fi colony sim that can go hilariously wrong horribly fast. It’s a game based on a storytelling concept, so it’s not about winning or losing at all. Most likely, you will fail quite fast during your first few (dozen) playthroughs, but the way that it will happen will keep you entertained and amazed enough to have another go at it pretty soon.

I put this one last because it doesn’t have an official Twitch integration (yet). But don’t worry, there’s a mod for that. TwitchToolkit introduces a voting system and a coin store, which allows your viewers to earn and spend coins on in-game events and items. The possibilities are endless, and the mod is in active development, so there will definitely be more to it soon.

Your community has been waiting for new ways to engage with you since Day 1. With Twitch integration you can give them exactly what they want, bond with people in your chat and have lots of fun at the same time.