Younger generations no longer watch traditional TV, let alone listen to the radio, or read newspapers. When they surf the Internet, chances are they have at least one form of ad blocking software enabled. Whenever they do still encounter an ad on websites, on social media, or in search results, they skip it as quickly as possible or unconsciously filter it out. The question of how brands can reach younger people with their ads becomes more and more pressing, but the answer is rather simple. Utilize the channels younger people use to consume media content and approach them in a way they deem familiar, authentic and trustworthy.

Don’t feel like reading? Take a look at our recorded webinar!

1.1. An Introduction To Live Streaming

2020 has been a year full of unexpected twists and turns. However, 2020 has also made a few things abundantly clear. Take online media for example. The past year has clearly shown that online media consumption plays an even bigger role in people’s lives than initially expected: every social media platform has noticed an enormous growth during the worldwide lockdown in the first half of 2020.

Live streaming differs from regular online video content in that it allows people to broadcast video content over the Internet in real-time, without having to record, store, or edit it. This process makes the content more raw and authentic. Since people are watching the video at the same time that it is broadcast, the live streamer can easily interact with their audience via live chat.

Many online platforms allow people to live stream all sorts of video content. However, only a handful of those platforms are widely known. As can clearly be seen in the graph below, Twitch is by far the biggest, most popular live streaming platform at the moment. In 2019, it even accounted for more than 70% of the total hours of live streaming content watched worldwide. (Note that Mixer has shut down since July 2020)

Even though Twitch is obviously the market leader regarding live streaming, it is still an untapped source of potential marketing benefits for many brands. That is why, in this article, the focus will lie mainly on Twitch.

Even though Twitch started as a platform dedicated to live gaming content, it has evolved into something way bigger than that. Nowadays, the platform also offers live content about music, sports, travel, food, etc. Furthermore, Twitch has become the go-to place for talk shows and people just chatting with their audiences. In the past few years, even big live events have found their way to the platform. On April 23 2020, Twitch hosted the biggest music concert ever. Travis Scott managed to amass an audience of over 12 million people who simultaneously watched his live performance in popular online video game Fortnite.

The magic formula that makes Twitch so unique and makes younger people prefer it over other video platforms is its interactive aspect: the platform allows for two-way communication between streamers and viewers, allowing streamers to build tight-knit communities around their channels. The idea that the interactivity around live streams is more important than the content in the stream itself, is confirmed in the way Twitch defines their platform:

Twitch is where millions of people come together live every day to chat, interact, and make their own entertainment together.

Even though Twitch has millions of daily users, it used to be an overwhelmingly male-dominated platform for a very long time. In September 2017, Twitch reported that men made up 81.5% of its user base. Over half – 55% to be precise – of these were aged between 18-34. However, according to more recent statistics from GlobalWebIndex from 2019, that gender split has changed. Nowadays, 65% of Twitch’s user base identifies as male and 35% identifies as female. In terms of the age split, the stats show a greater percentage of Twitch users falling into younger age categories, with 73% in total falling into the two brackets aged under 35. The greater share (41%) are 16-24, with around a third aged 25-34.

The people-watching Twitch generally turns to the platform because of three reasons. The first reason is the most simple one: because Twitch is a form of entertainment. Most popular streamers on Twitch are very funny or create compelling video content, filled with amazing video and audio effects, making Twitch as good a pastime as any other form of popular media. A second reason to watch Twitch is because of the community feeling. Watching the same live content as hundreds or thousands of other people automatically creates a feeling of connectedness, especially when watching very specific, niche content. Thirdly, people often watch gaming streams to improve their performance in a specific video game. Influencers streaming gaming content are often very good at the games they play, so their viewers can learn a lot of tips, tricks, and strategies by watching them. Some streamers even break down what they are doing when playing, to teach their viewers new things.

While still pretty undiscovered by the general public, Twitch has become very popular with people in Generation Y and Generation Z. Nowadays, the website has a whopping 26.5 million daily visitors, with more than 2 million users watching at any given moment. Imagine being able to reach those people with ads for your brand. It is not as impossible as you might think.

2. Utilizing The Power Of Live Streaming

Generally speaking, there are three ways in which a company or a brand can benefit from live video content and live streaming platforms. The easiest, most straightforward way to advertise on Twitch, is to register on Twitch’s advertising platform and utilize Twitch’s native ad formats.

However, even though native ads are the easiest way to reach an audience, it is not the most efficient way. Native ads on Twitch experience some of the same problems as ads in traditional media: people do not pay attention to the ads, quickly glance over them, or find them intrusive and annoying.

2.2. Start Live Streaming As A Brand

A second way to utilize Twitch to your brand’s advantage is to create your own channel and live content. Creating your own content allows you to connect to your audience in a personal, authentic, and believable way. However, building an audience requires lots of time and work, because you have to create and share content regularly to maintain your audience. Furthermore, on platforms like Twitch, there is a lot of competition from other creators, which makes it rather hard to stand out. It is perfectly possible that even though you spend hours streaming and creating content, you will never be able to create a meaningful relationship with a significantly large audience. There is simply no magical formula to become successful on Twitch. Luckily, there is a rather easy way to reach the audiences of people who have put in the work and who have succeeded in building a large audience: influencer marketing.

One might wonder how influencer marketing on Twitch could make a difference. However, the numbers speak for themselves. A study shows that consumers perceive influencer advertising to be more effective than traditional marketing approaches. On Twitch, 64% of the viewers have indicated that they have purchased products that were recommended by their favourite streamer.

Other than the fact that people like influencer marketing messages way more than traditional advertising, Twitch influencer marketing has two more unique advantages. Firstly, influencers lend their image and reputation to a brand, creating some kind of spillover. Secondly, when working for a brand, influencers give said brand direct access to the communities they have built throughout the years.

The streamers can also present the product(s) in a more engaging way such as giveaways. They can communicate with their viewers as they talk about the product by reviewing it and answering questions about it in real-time. 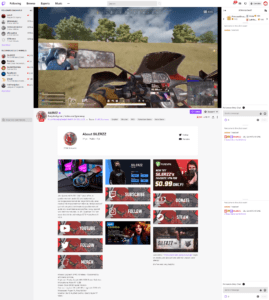 Together with the rise of the Internet over the past two decades, traditional advertising has been dying a slow death. Brands and companies keep struggling to reach their target audiences using traditional ads, especially if they want to reach generations Y and Z. More modern approaches, like influencer marketing, are the solution to that problem. Since younger people prefer online media over traditional media, influencer marketing allows brands to reach generations Y and Z in an authentic and trustworthy way, using the online media channels they know and trust.

Even though influencer might seem like an incomprehensible, complicated advertising method, it might just be the innovation your company needs. There are many resources available to guide you on your voyage through the world of influencer marketing. Furthermore, most influencers are kind people. Just talk to them, most of them would be happy to help you.